Can forest-rich countries learn from the mistakes of extractive projects and avoid unleashing their own resource curse?

For poor developing countries, exploiting natural wealth such as minerals and metals should prove a blessing, offering the potential to generate huge revenues and help lift them out of poverty. Instead many have been inflicted by the “natural resource curse”, in which countries with an abundance of natural resources enjoy less economic growth and worse development outcomes than those endowed with less of Nature’s bounty.

Despite efforts to improve governance and oversight related to extractive industries projects, the natural resource curse persists today. A recent WRI, Oxfam and Bank Information Center report shines the spotlight on the Camisea natural gas project in Peru and highlights the importance of investing in sub-national governance and capacity building before scaling up investments in natural resource projects.

The findings of the report, People, Power and Pipelines, as described in this article, have implications not only for extractive industry projects, but also for forest management in developing countries. In particular, international financial institutions, national governments and other stakeholders involved in REDD - that seek to reduce emissions from deforestation and forest degradation - should learn from the mistakes of extractive projects and avoid unleashing their own resource curse.

The massive Camisea project’s gas production infrastructure and pipeline physically impacted five of Peru’s 24 regions, three of which are among the poorest in the country. Between 2004 and 2009, over $1 billion in gas revenues were distributed to sub-national governments. Yet the social benefits have arguably been slight. In 2008 close to 60% of Peru’s rural population remained mired in poverty, including regions benefiting from pipeline revenues, and despite the fact that national poverty levels declined steadily from 2006 through 2008. In addition, the project took a heavy toll on local ecosystems with three major oil spills occurring within the first 15 months of construction.

Peru embarked on a substantial decentralization process in 2002, handing more political and fiscal control to sub-national governments. This meant that provincial and district governments in the vicinity of the project were unprepared, only two years later, either to manage the significant social and environmental risks associated with a major gas pipeline or to effectively deploy the massive revenues generated. 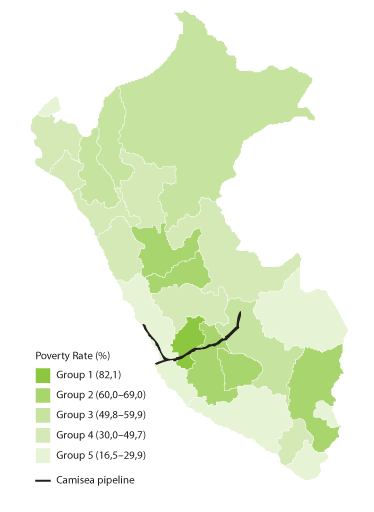 Against this backdrop, People, Power and Pipelines analyzed the experience of sub-national government in the Cusco region in managing the natural gas project’s impact and associated revenues between 2005 and 2007, researching public records and conducting interviews with key players. The report’s findings highlight five challenges, stemming largely from weaknesses in sub-national planning and capacity, which may provide an instructive lesson for similar situations in other countries and sectors.

Peru’s experiences from the Camisea project could prove instructive for REDD as the international community ramps up efforts to provide a financial compensation mechanism for developing country actions to reduce emissions from forest loss. Although funding for REDD will likely take different forms, a frontrunner option is to link it to carbon markets in developed countries. Companies would then meet their emission reduction commitments by channeling funding to REDD projects in forest-rich countries.

If REDD does not work as intended, its failure could not only undermine climate reduction goals in developed countries but also inflict a new kind of resource curse on developing nations.

Like Camisea, and extractive projects more broadly, carbon markets would generate funding for poor, but natural- resource- rich, nations, at a scale rarely seen before. There is a risk, though. If REDD does not work as intended, its failure could not only undermine climate reduction goals in developed countries but also inflict a new kind of resource curse on developing nations.

Above all, careful sequencing of governance and capacity building should be employed before scaling up revenue flows. This will help ensure that urgently needed REDD and extractive industry payments are used in a way that generates long term development benefits, especially for the poor. It will create incentives for strengthening developing country governance and capacity. And it will help architects of REDD avoid inflicting a new “REDD resource curse” on nations whose wealth lies in forests.

Linnea Laestadius is an intern with the Office of the Vice President for Science and Research at WRI. She is a PhD student in Health and Public Policy and a CLF Farming the Future Fellow at the Johns Hopkins Bloomberg School of Public Health.