This bulletin provides updated context for United Nations Framework Convention on Climate Change (UNFCCC) member countries on the full range of recent U.S. climate change actions in the buildup to the Conference of Parties (COP)-15 in Copenhagen, Denmark.

NOTE: This is an update to a previous Countdown to Copenhagen post. The most current version of this fact sheet is available here.

Over the course of 2009, the U.S. government has significantly altered its approach to climate change. During his campaign, President Obama called for reducing greenhouse gas emissions to 1990 levels by 2020, equivalent to approximately 14% below 2005 levels. His call to action builds on a solid foundation of policies and initiatives enacted by U.S. state and regional governments over several years. Since President Obama’s inauguration, the federal government has taken unprecedented action to slow emissions growth and move the United States toward a low-carbon economy.

The global spotlight has been focused on the U.S. Congress’ efforts to write new legislation because it will likely include economy-wide emissions targets. Also important to the global discussions will be the emissions cuts achieved through a wide range of actions. A number of such actions are underway within the U.S. executive branch to meet the president’s climate change and energy goals. While yet un-quantified, they have the potential to result in significant emissions reductions.

This bulletin provides updated context for United Nations Framework Convention on Climate Change (UNFCCC) member countries on the full range of recent U.S. climate change actions in the buildup to the Conference of Parties (COP)-15 in Copenhagen, Denmark.

In April 2009, the U.S. Environmental Protection Agency (EPA) sought public comment on a proposed finding that greenhouse gases are a danger to public health and welfare, a threshold determination that will allow EPA to regulate greenhouse gases under existing provisions of the Clean Air Act, without the need for additional legislation. The finding is likely to be finalized no later than February 2010 following intra-government review, after which EPA may prescribe specific mechanisms for regulation of greenhouse gases. Another finding currently in intra-governmental review — whether cars and trucks “cause or contribute to that pollution”— would, in turn allow the federal government to regulate tailpipe emissions by increasing vehicle mileage requirements.

In October 2009, EPA took a further step, issuing another proposed rule that, when finalized and implemented, would regulate major stationary emitters in the United States. The rule would apply to the country’s largest power plants and other sources emitting more than 25,000 tons of CO2- equivalent annually. The rule is in a mandatory public comment period and likely to be finalized in spring 2010, after which individual permitting proceedings will set specific greenhouse gas limits for individual facilities.

The United States has made green spending a key part of its stimulus packages in response to the domestic and global economic crisis.

In February 2009, Congress, with the encouragement of President Obama, passed the American Recovery and Reinvestment Act (commonly known as the stimulus package), which provides at least $112 billion for investments in renewable energy, efficiency, smart grid, “green-collar” job training, and other emissions-reducing clean energy projects. Worldwide, this green investment by the U.S. is second only to China’s stimulus package in amount dedicated to green funding. An evaluation of stimulus packages by HSBC also found that only the U.S. plan provided a “real boost to renewables.” [HSBC, February 2009] 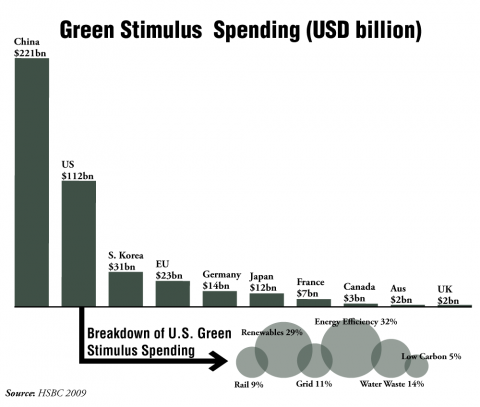 On June 26, 2009, the U.S. House of Representatives passed the American Clean Energy and Security Act of 2009, introduced by Congressmen Henry Waxman and Ed Markey. Implementation of its proposed national, economy-wide cap-and-trade program would reduce emissions from covered sources to 17% below 2005 levels by 2020 (lowering total U.S. GHG emissions 15% below 2005 levels by 2020) and 83% below 2005 levels by 2050. Additional measures in the bill, including performance standards on uncapped sectors; extensive domestic provisions supporting clean energy and energy efficiency; and government purchases of international forest credits, would drive net emissions still lower. The Senate now has responsibility to consider legislation. Although it is currently unclear what the Senate will produce, the Waxman-Markey bill provides a basis for the United States’ provisional target range presented to the Copenhagen negotiations.

Senate legislative activity began when, in September 2009, Senators John Kerry and Barbara Boxer introduced the Clean Energy Jobs and American Power Act. The bill is similar to the Waxman-Markey bill with a few exceptions, including a greater amount of allowances dedicated to deficit reduction (Senate rules require the bill to be deficit-neutral), and a stronger mid-term target for capped emissions of 20% by 2020 (the chart below compares emissions reductions). The bill passed out of its assigned committee, the Environment and Public Works Committee, in November, but the minority members of the committee boycotted the vote, reflecting the partisan nature of the climate debate in the Senate. Despite this, several bipartisan alliances of senators are developing versions of climate bills likely to be introduced in 2010.

For more on how the U.S. legislative process works, please visit U.S. Climate Policymaking: A Guide for the Perplexed 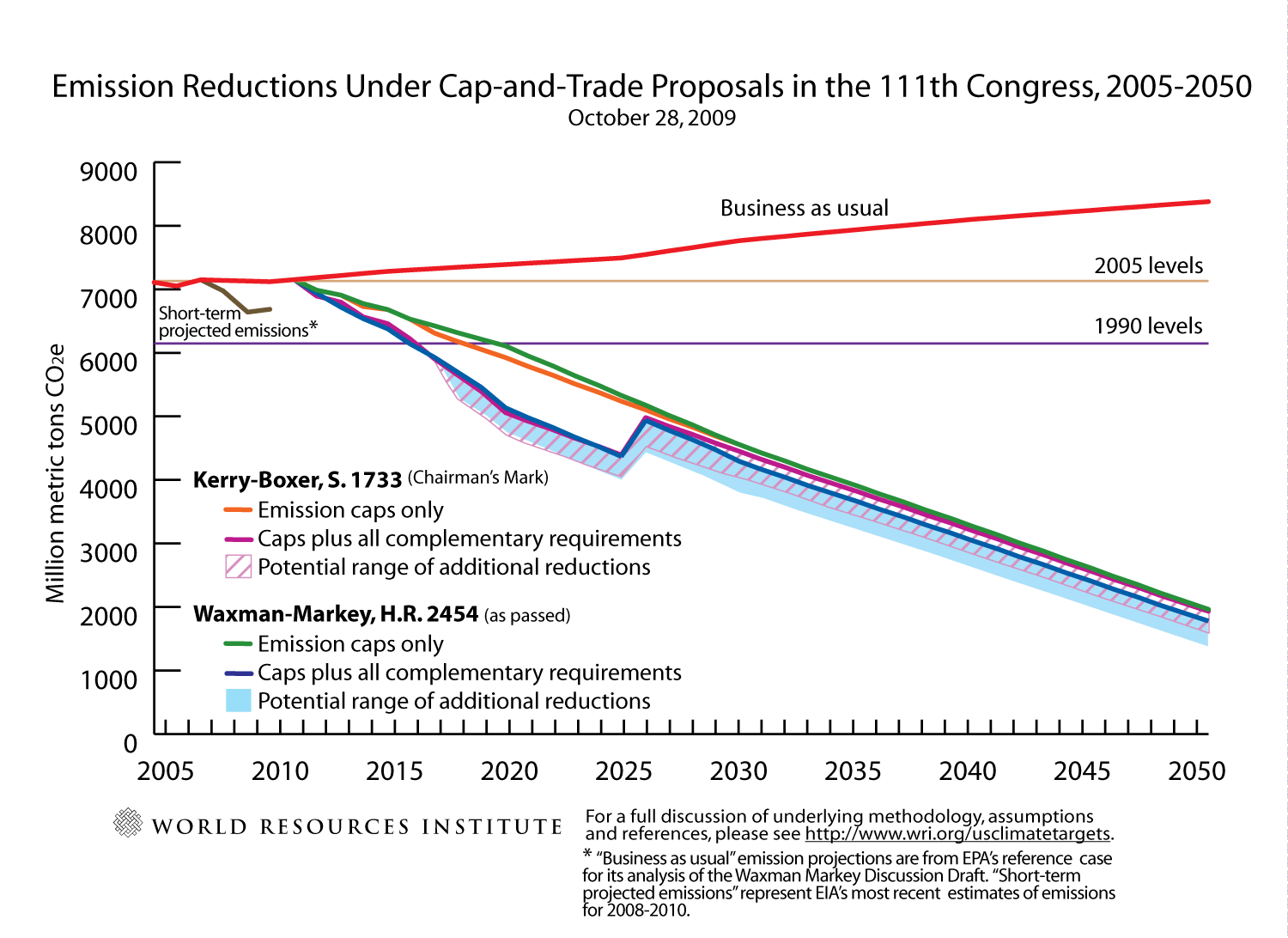 Emission Reductions Under Cap-and-Trade Proposals in the 111th Congress, 2005-2050

Local Action: Mayors' Climate Protection As of 2009, 1016 U.S. cities have signed onto an agreement to: