A first-hand tour of CCS sites in China suggests possibilities for cooperation with the United States---to their mutual benefit.

Carbon capture and storage (CCS) technology involves capturing carbon dioxide emissions from fossil fuel use (coal, oil, and natural gas) and some industrial processes, (such as cement production) and storing it permanently underground. As the world’s two largest CO2-emitting countries, the United States and China are in a unique position to act together to advance CCS deployment worldwide. Both Peng China and the U.S. already have significant CCS R&D programs, but there is growing consensus that China and the U.S. together could develop CCS more quickly than if they acted alone. The announcement last week by Energy Secretary Chu of a U.S.-China Joint Clean Energy Research Center---with CCS as one of the research tracks---is a good step forward.

Last month, a team of American CCS experts (led by Tsinghua University and WRI) got a first-hand look at China’s latest CCS development efforts. The team is part of a steering committee to develop environmental regulatory guidelines for responsible CCS deployment in China, an effort supported by the Asia Pacific Partnership. Here are a few of WRI’s key findings, based on the site visits (summaries of two visits are below) and subsequent meetings of the steering committee:

Below is a short description of two of the sites the CCS team visited during its visit to China---sites which provide opportunities for near term on-the-ground CCS demonstrations in China:

This project (approximately 10 billion RMB, or $1.46 billion) is a first-of-its-kind facility which employs a Chinese-developed technology for direct coal liquefaction (DCL). The project was initiated in 2004 and completed a successful first commissioning with 303 hours of successful operations last December. The plant will soon conduct a second, 1,000 hour commissioning with full-scale operations to follow. The geology in the region looks promising, with an estimated 4.4 billion tons of CO2 storage capacity in saline formations in the Ordos basin. Geologic storage site selection and characterization efforts are underway with an anticipated CCS demonstration injecting 100,000 tons per year beginning in late 2009. 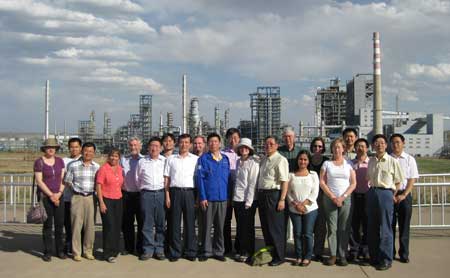 GreenGen is China’s most prominent IGCC project, owned by a consortium of all of China’s major power producers, led by Huaneng, its top coal producer, Shenhua, and potential participation by Peabody Energy. Construction of the 250MW IGCC plant began in 2008, and NDRC granted final approval in May 2009. The project will use hydrogen turbines, and a 400MW addition is planned for 2014-2016. This second phase will likely include CO2 injection of 1 million tons per year for enhanced oil recovery. 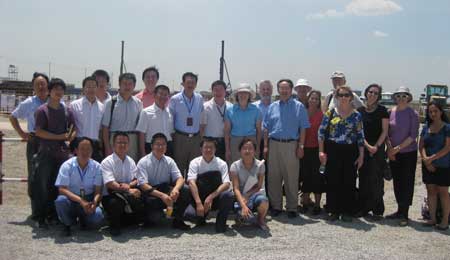 In addition to the WRI CCS team, the steering committee attending this tour includes many of the leading U.S. experts on CCS technology:

Officials from the National Development and Reform Commission and the National Energy Administration also met with the steering committee.