The first-ever Interactive Forest Atlas for Gabon offers data and tools to support the sustainable management of Gabon’s forests.

At the launch event in May, S.E. Emile Doumba, the Gabonese Minister of Forest Economy, Water, Fishing, and Aquaculture, said:

With this dynamic atlas, the government of Gabon affirms its commitment to transparency and good governance in forest management. The forest data produced by this partnership [with WRI] are now available for public use.

No more than a year ago, Mr. Doumba’s speech would have been impossible to give in the Republic of Gabon.

Covered 80% by lush tropical forest, Gabon contains some of the world’s most valuable, biodiverse forested regions. During past decades, however, forest data and maps were guarded from the public – creating dangerous confusion on the ground and forming a significant obstacle to sustainable forest management.

It was commonplace for citizens living within Gabon’s forests to witness logging operations crossing into their communities or customary lands unannounced, posing a serious threat to their livelihoods. Companies operating in logging concessions faced a similar predicament, unable to secure their concession borders and prevent neighboring companies from poaching trees.

In the absence of clearly defined, publicly available logging boundaries, forest communities and companies alike had no platform from which to defend their rights.

Acknowledging these problems, Gabon began to enact reforms during the 1990s to strengthen management of its forest resources and better address the access rights of its citizens. A new forest code, promulgated in 2001, mandated improvements in key areas, including: 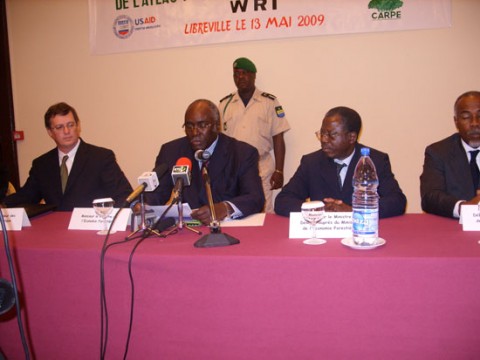 S.E. Emile Doumba (second from left) speaking during the launch of the first Interactive Forest Atlas of Gabon in Libreville. (May 13, 2009)

In 2006, WRI signed an MOU with the Ministry of Forest Economy, Water, Fishing, and Aquaculture (MEFEPA) to collect data and create tools necessary to support sustainable management of Gabon’s forests. These efforts culminated in the creation of the first-ever Interactive Forest Atlas for Gabon, which WRI launched this May in Libreville.

Through an interactive collection of maps and data sets, the CD-ROM Atlas and accompanying report provide the government and – equally important – the public with an accurate presentation of activity occurring within Gabon’s forest sector.

Designed in an accessible, user-friendly format, the Atlas will serve as a standardized base of reference, transforming the way Gabon collects, manages, and distributes forest information. Above all, the Atlas gives all stakeholders, from government agencies and private companies to NGOs and forest communities, an avenue to access accurate forest information in pursuit of enforcing regulations and defending their rights. 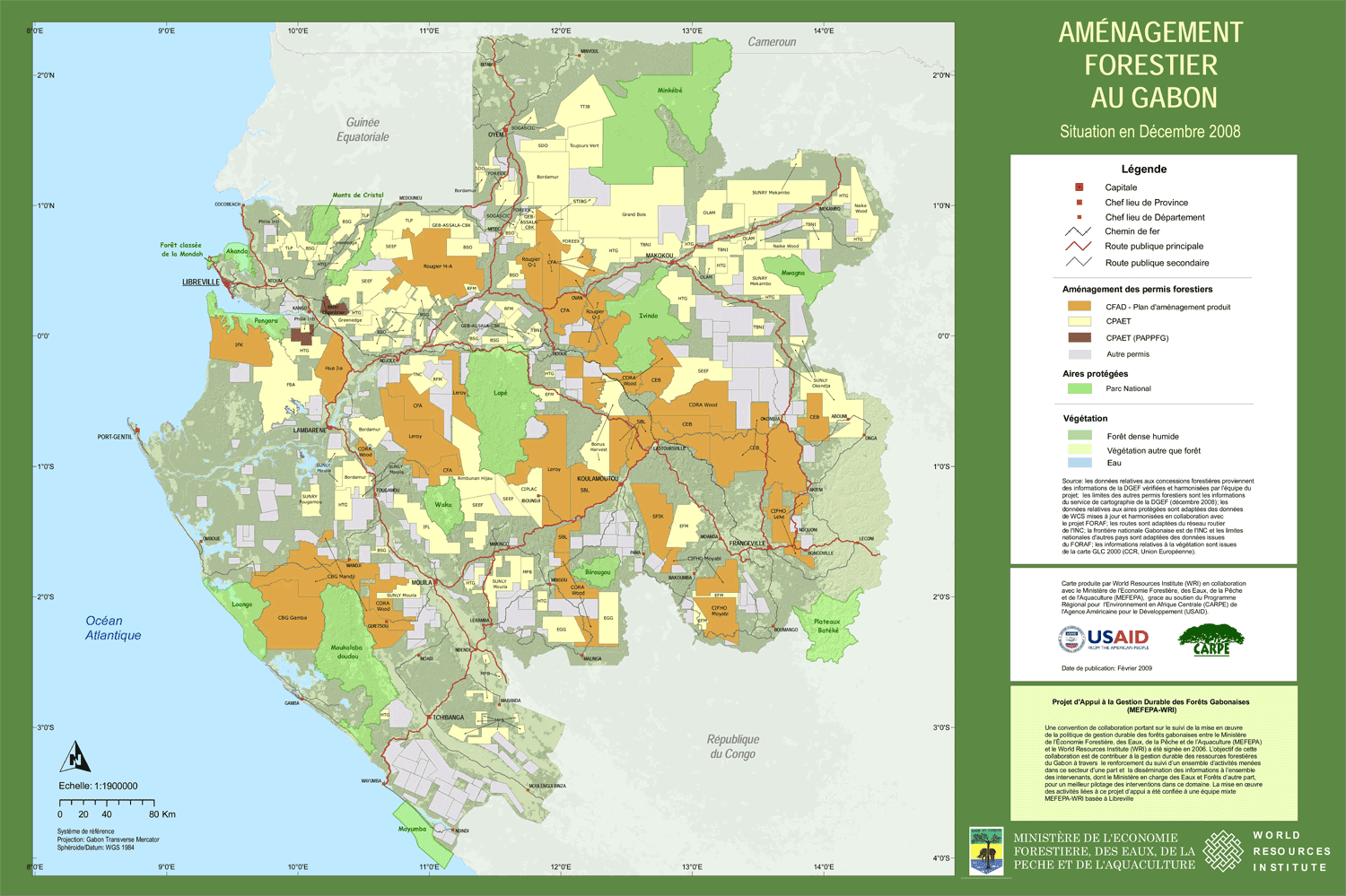 Forest Management in Gabon: As the official poster for the Gabon Interactive Atlas project, this map provides an overview of current logging titles and protected areas in Gabon as of December 2008.

Gabon’s small population and the high revenues stemming from oil production have historically sheltered its forest resources from agricultural and industrial pressures. However, with global demand for wood and other forest resources on the rise - particularly from Asian markets – forests have become a central economic resource. Gabon’s forest sector currently accounts for 13 percent of national exports (2.5 percent of GDP) and employs 28,000 citizens – 28 percent of the working population.

The new Atlas will help ensure that forests continue to play a key role in Gabon’s economy, while at the same time helping the government make certain that forest operations are legal, sustainable, and respectful of local rights to resources. Moreover, the Atlas project is strengthening the technical expertise and capacity of the Gabonese government, ultimately allowing it to more effectively monitor and manage the nation’s forests.

WRI and MEFEPA are committed to regularly updating the information contained within the Interactive Forest Atlas, as well as to expanding its application through subsequent versions. A revised version of the Gabon Forestry Atlas is scheduled for release next year and will expand data in several key areas, notably small logging permits, annual harvestable areas, forest plantations, and production/export statistics.

As international attention turns towards the connection between deforestation and climate change, Gabon—along with its Central African neighbors—faces a novel suite of opportunities related to the future of forest resource use. Through the right set of policies, institutions and incentives Gabon may be able to move from the status quo of economic development versus environmental conservation and towards a future where these two objectives better converge.