[!]Note:[/!] this fact sheet has been updated. Click here for the latest version.

In a development little noticed by many in the international community, China is putting numerous domestic energy policies and programs in place that will result in significant progress toward reducing its greenhouse gas output from a business-as-usual scenario.

Chinese decision-makers have set aggressive domestic energy targets in a suite of domestic policies even as China continues to seek rapid growth to raise the standard of living to escape its relative poverty (China’s GDP per capita is less than one tenth of the U.S. GDP per capita). Unveiled in June 2007, “China’s National Climate Change Programme” linked its energy policies as key elements of China’s climate change mitigation efforts. This policy has been strengthened and complemented with additional initiatives, including a set of industry, transportation and construction energy conservation policies announced by Premier Wen Jiabao in January 2009. Premier Wen has also announced that China will be adding greenhouse gas goals in its 12th Five Year Plan, to begin in 2011, although no details are available yet. To date, China has:

Adopted a 20% Reduction in National Energy Intensity By 2010

Passed a National Renewable Energy Standard of 15% by 2020

One-third of China's stimulus package is focused on infrastructure that will promote energy efficiency.

The major elements of the stimulus package are:

While China and the United States today emit approximately the same amount of greenhouse gases, it is worth noting that China’s per capita emissions are only one-fi fth of those of the United States. 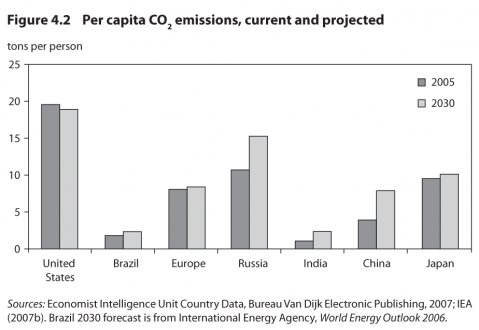 As China and the Chinese people aspire to economic development levels on par with the United States, it will be critical to de-link economic growth with greenhouse gas emissions. The decarbonization of China’s economy is beginning with the steps taken in policy today. The United States and China together must move beyond conventional coal to meet economic aspirations and develop global greenhouse gas stabilization goals.

The World Resources Institute (WRI) is drawing upon the institute’s technical expertise, research, analytical tools and history of effective private sector convening to help the Chinese government succeed in meeting its energy and climate goals.

Relevant WRI programs and projects include: