LAURETTA BURKE: It’s a very positive action. We’re very pleased with this designation. It’s a large area, and when you protect large marine areas you stand a better chance of success. And the areas that they have selected in the Pacific include some very pristine marine areas. So there is a very good chance of reducing future threats from overfishing pressure on these reefs.

GHAZI: What are the major threats that face the world’s coral reefs and what more needs to be done to protect them?

BURKE: There’s a wide variety of threats affecting coral reefs, some local in nature and some global. Of the local threats, one of the most pervasive is overfishing pressure which can be reduced by this sort of Monument Status and by restrictions on commercial fishing within these reserves. Some other local threats include coastal development and runoff from the land, also runoff from excessive fertilizer application, and in some areas, tourism impacts. The global threats are obviously more difficult to deal with. As we emit more greenhouse gasses we’re getting warmer seas. We’re also getting acidifying seas. So it's important that there are actions to reduce the rate of greenhouse gas emissions, particularly CO2. But a combination of local action and global action is needed because, as reefs face increasing pressure from these global threats, one thing we can do is reduce the local threats, thereby giving them a better chance to recover after an event like coral bleaching. 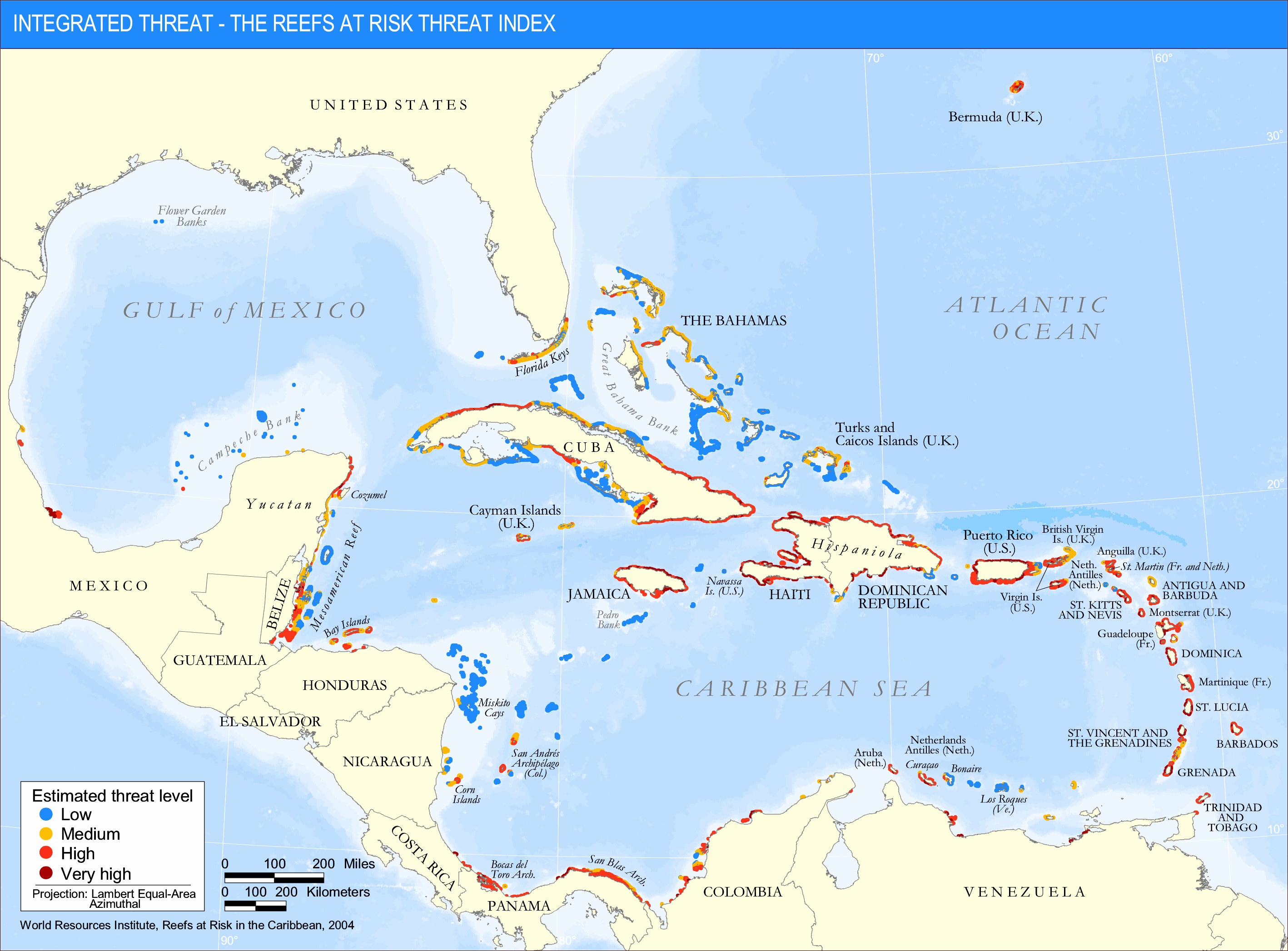 GHAZI: So how and where is the World Resources Institute contributing to reef conservation efforts, and are we concentrating more on the local than the global solutions?

BURKE: Certainly in the past we’ve focused more on local solutions; now we’re including consideration of these global threats. The original global Reefs at Risk Analysis, which is a map-based indicator of threats to the world’s reefs, focused on local threats and developed a set of indicators to show the relative pressure from human activities across the world’s reefs. The project series began 10 years ago, and last year we began a new project called “Reefs at Risk Revisited” which involves a high resolution update of this global threat analysis which will now include global threats. We are looking specifically at warming seas, and ocean acidification out to the year 2050.

It’s a fairly comprehensive study in that it integrates information on human pressure on coral reefs, the climate related threats, current status and management of reefs and policy recommendations. So it’s a very useful body of information for priority setting. It's done in a geographic information system so these spatial data sets can be used by both regional and national organizations to do priority setting within their countries.

GHAZI: Who do you expect to use this information?

BURKE: A wide variety of users. One of the main users is coastal planning organizations and conservation organizations that are working on coral reefs. So these tools very much help with priority setting within the region, or within countries. They also help governments and MPA managers looking at different threats within different areas to guide prioritization. We also target tourism agencies. We like to show how much revenue is contributed through coral reef associated tourism, and we think this will help raise awareness within the tourism industry of the importance of maintaining healthy reefs.

GHAZI: The economic valuation of reefs is an innovative area that WRI is getting into, so could you explain a little more?

BURKE: Economic valuation involves putting a dollar value on the goods and services provided by coral reefs. Very often dollar values speak to policymakers and businesses in a way that other conservation arguments can’t. The economic valuation helps to highlight how these groups are currently benefiting from a healthy reef ecosystem and what they stand to lose if a reef continues to decline. So in the case of tourism, we raise awareness about the large values that are often coming into countries and also the taxes that governments receive because of tourists visiting the country. We also look at the contribution of reef-associated fisheries to the economy and the shoreline protection services provided by reefs. And that’s a very important and very high-value service.

GHAZI: So what countries are you doing economic valuation in, and are there any examples of how policymakers have used the information that you’ve given them.

BURKE: Yes. Our country level work on economic valuation of coral reefs began in the eastern Caribbean in Tobago and St. Lucia. We’re just finishing a project in Belize looking at the economic value of coral reefs and mangroves. And we’ve now begun work in the Dominican Republic and Jamaica. In Tobago for example, we looked at the country as a whole, but also at the value of coral reefs in the Buccoo Reef Marine Park, which at present is a bit of a paper park - although it’s designated, there isn’t particularly active management enforcement of fishing regulations, and there’s not good control of land-based sources of pollution entering the Buccoo Reef area. So we looked at the economic contribution of tourists to that area and compared it with the cost of interventions to improve water quality and coral reef health in that area. And that was a case where it’s clear that some modifications that would radically improve water quality and thereby help reef health were certainly sensible investments in the long-term interest of the island of Tobago.

GHAZI: So are you optimistic then about the future survival of the world’s coral reefs in the long term?

BURKE: I’m confident that reefs will survive long term, but I think there will be a smaller area of coral reefs a century from now than there is today. One of the things that’s very important as we pull together information on threats and on warming seas and acidifying seas, is to identify the areas with the best prospect of staying healthy in the long run, and really protect those areas. And I think this designation of protected area in the Pacific by President Bush will help to that end.