The Government of Ecuador recently announced that it is pursuing efforts to leave the oil under Yasuni National Park untapped to protect the rainforest, its species and its inhabitants.

President Rafael Correa proposed the Yasuni-ITT Initiative in the summer of 2007, and was set to decide this month whether to move forward with the project, or to begin the process of selling licenses to extract the oil. “The project will move forward for another 6 months,” said Fander Falconí, Ecuador’s Minister of Foreign Affairs, extending the decision deadline through June 2009.

If Ecuador ultimately succeeds in convincing the international community to compensate it for the revenues forgone from the exploitation of oil, the funds raised will support the preservation of nearly 5 million hectares of biodiverse rainforests, protect 180,000 members of indigenous and Afro Ecuadorian communities, and help put Ecuador on a more sustainable energy path. 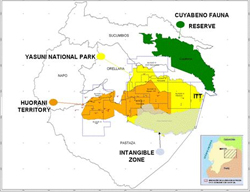 The Yasuni National Park is located in the easternmost corner of Ecuador’s Amazon region. Yasuni was named a UNESCO biosphere reserve in 1989 and scientists including Jane Goodall and E.O. Wilson have called it “one of the most biodiverse places on earth.” At least two indigenous tribes, the Tagaeri and Taromenane, maintain their traditional lifestyles in voluntary isolation in Yasuni.

The innovative proposal aims to leave 20% of Ecuador's oil unexploited forever. To make the proposal economically viable, Ecuador aims to generate funding to offset a portion of the foregone revenue and use these funds to pursue sustainable development projects in line with the country’s National Sustainable Development Agenda.

The plan would create a new financial instrument to support Ecuador’s long term sustainability goals and would place an economic value on biodiversity.

WRI’s Jake Werksman said the “innovative” proposal “challenges all to think differently about sustainable development.” “It’s homegrown,” he added. “It’s holistic in the sense that it seeks to achieve multiple objectives, and it is solutions oriented.”

How the Yasuni-ITT Initiative Would Work

According to recent studies funded by the Government, the proposal would leave 20% of Ecuador’s proven oil reserves—or around 840 million barrels of oil—untouched. If this oil were drilled, processed and burned as fuel, 407 million metric tons of carbon dioxide would be emitted into the atmosphere.

Roque Sevilla, who leads the Ecuadorian Commission on the Yasuni-ITT initiative, presented the proposal as an attempt to link "two big issues". “One is global warming and the other one is the loss of biodiversity. And we wanted to link them both.”

Over a ten-year period, Ecuador would issue Yasuni Guarantee Certificates (or CGYs according to their Spanish acronym) equal to the 407 million tons of CO2. The objective is for the CGYs to be recognized as equivalent to the carbon offsets now traded under the European Trading System (ETS), EU Member States and companies operating under the EU ETS would purchase and trade the CGY credits as they do other GHG allowance credits. Income from the sale of CGYs would go to the government, with the total amount of income received dependent on the prevailing market price of carbon.

The money raised would go into a Trust Fund managed and overseen by members of the Ecuadorian Government, non-governmental organizations and financial contributors.

Interest from the Trust Fund would only be used to fulfill the following five initiatives included in Ecuador’s National Sustainable Development Agenda: forest protection and recovery, changes to the country’s energy supply and demand, and domestic sustainable development initiatives (see presentation above for more detail).

Ultimately, the Ecuadorian government wants the Yasuni-ITT Initiative to become a “pilot project” for other countries such as Papua New Guinea, Peru and Brazil to follow.

Keys to Success and Remaining Questions

Since the international launch of the proposal in the summer of 2007, WRI has hosted several technical workshops with international development and finance experts, members of the Ecuadorian Government and civil society partners to assess and improve the viability of the proposal.

Roque Sevilla and Yolanda Kakabadse, members of the Commission leading the Yasuni-ITT initiative, came to WRI in December 2008 to solicit reactions and advice from the environmental NGO community based in Washington D.C. They aimed to refine and garner support for President Correa’s bold proposal. NGOs and academics from the U.S. and Quito joined the meeting via web-based conference call.

“If we can manage to move Ecuador’s government for the next 100 years into eliminating the thought of oil exploration in protected areas,” Kakabadse said, “that would be an enormous achievement--because this link between biodiversity and climate change would be really proven to be effective.”

At these meetings, a number of questions were raised about the proposal, with many participants identifying areas where the proposal can be strengthened: