With world heads of state gathered in New York to discuss the status of the Millennium Development Goals (MDGs), climate change and ecosystem destruction brings added pressure to the fight to end extreme poverty.

According to a recent MDGs status report, the number of people living in extreme poverty has dropped from 1.8 billion in 1990 to 1.4 billion in 2005. But most of the decline occurred in East Asia, particularly China, and progress has been slow in other regions, especially sub-Saharan Africa. Worse, this region, along with Latin America and Southeast Asia will be hard hit by climate change, raising the bar on poverty eradication even higher.

UN Secretary Ban Ki-moon has sought to bring this “development crisis” to center stage. He argues for urgent action, saying “delivery on commitments made by Member States has been deficient, and has fallen behind schedule.” “We are running out of time,” he added.

To bring attention to these challenges, and their potential solutions, the Poverty-Environment Partnership (PEP) hosted a policy dialogue on “Environment, Climate Change and the MDGs: Reshaping the Development Agenda” to coincide with the UN’s High-level Event on the MDGs (visit the official website).

WRI and other event participants discussed the need for new commitments and approaches to take the threats and risks of climate change into account when fighting poverty.

The poor, especially the rural poor who depend on natural resources for their livelihood, are the most vulnerable to environmental shocks and stresses. Yet climate change by itself will seriously degrade many of the natural resources and ecosystems on which these communities depend for their livelihoods. For example, climate change will expose an additional 75-250 million people in Africa to water shortages. (300 million Africans already live in drought or drought-prone areas.)

The chart below shows how climate change is predicted to significantly affect agriculture productivity around the world--particularly in Africa, Latin America and Southeast Asia: 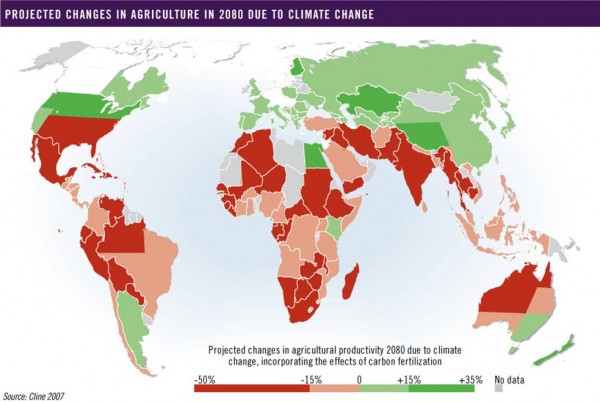 Yet the poor often lack the means to adapt and lift themselves out of deep poverty.

The World Resource Report 2008, a collaborative effort between WRI and the UN Development Programme, UN Environment Programme and the World Bank, highlights how nature-based enterprise, coupled with secure tenure rights and supportive policies, can help the rural poor raise their incomes, boost agricultural productivity and become less vulnerable to climate change. These methods, if properly “scaled up,” can help the world’s rural poor build resilience to the future effects of climate change and enhance their opportunities to lift themselves out of poverty.

In Niger, for example, farmer-managed natural regeneration (FMNR) practices--the adoption of simple, low-cost techniques for managing the natural regeneration of trees and shrubs—has led to the “re-greening” of the country’s semi-arid Sahel region. Over 250,000 hectares of degraded land have been restored to crop production, and vast expanses of savanna devoid of vegetation in the early 1980s are now densely studded by trees, shrubs, and crops. Watershed restoration in India’s Maharashtra State, wildlife conservancies in Namibia and restored wetlands fisheries in Bangladesh are producing similar benefits, on a significant scale, for both people and nature.

Such efforts show that nature-based, pro-poor development can lead to significant poverty reduction and an increase in the rural poor’s resilience to climate change.

At the midway point of the 2015 MDG target date, national governments and global institutions need to redouble their efforts to scale-up investment provide development aid—especially in regions where climate change is transforming landscapes and threatening the lives and livelihoods of impoverished families and their prospects for a better life.

Read more about how to help the rural poor build resilience to climate change in the World Resources Report 2008. And learn more about the Poverty-Environment Partnership (PEP) here.