Droughts and desertification associated with climate change will hit Africa hard. Already, more than 300 million (out of 930 million) Africans live in drought or drought-prone areas. And a 2007 Intergovernmental Panel on Climate Change (IPCC) report found that by 2020, climate change will expose an additional 75-250 million on the continent to water shortages.

In Niger, the Sahara desert has been moving further south into the country’s semi-arid Sahel region, overtaking farm plots and displacing Niger’s rapidly growing population. Rakia, a 35-year-old mother from the region, said of the worsening conditions: “In the past there was water in the watering hole for six or seven months, but now the watering hole is not enough.” (Watch a video of Rakia’s story here.)

Many of Niger’s citizens–60 percent of whom live on less on less than $1 a day—will face similar challenges as they struggle to grow crops in the Sahel’s sandy, nutrient poor soils, made less productive by the increasingly scarce and erratic rainfall predicted under changing climate. 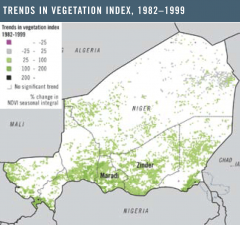 Along with other soil and water conservation programs, the key vehicle for this remarkable transformation was farmer-managed natural regeneration, or FMNR–the adoption of simple, low-cost techniques for managing the natural regeneration of trees and shrubs.

Over many decades, Nigerien farmers had cleared their fields of vegetation, leaving what turned out to be an “underground forest” of living stumps and roots. FMNR is based on the regeneration of native trees and shrubs from these mature root systems, which promote surprisingly fast re-growth and allow trees to be trimmed and pruned to maximize harvests. The farmers use the tree branches for firewood, while the fruits and bark go toward food and medicine. The trees’ roots minimize soil erosion while their leaves fertilize garden plots. A number of international donors and NGOs began testing the concept with Niger’s farmers in the 1980s—the soil productivity in the original plots visibly improved, and the farmers had a consistent source of firewood for cooking.

Following FMNR’s visible initial successes, farmers throughout Niger’s Sahel region began to experiment with tree regeneration. As thousands of households made impressive gains in crop yields and incomes in a short time period, the practice spread from farmer to farmer and from district to district, driven by self-interest. Because regenerating trees requires no financial outlays for materials or equipment by poor, risk-averse farmers, FMNR was well suited to such spontaneous self-scaling. (Read more about the importance of scaling.)

The simple and cost-effective practice of farmer-managed natural regeneration has provided an impressively wide range of benefits for Niger’s impoverished rural communities. By 2007, between a quarter and half of all the country’s farmers were involved, and estimates suggest that at least 4.5 million people were reaping the benefits. The results over the last 20 years speak for themselves:

With trees now carpeting land that was barren within the last ten to twenty years, Niger’s farmers have produced one of the most visibly successful examples of natural resource management in the world today.

A Cushion Against Climate Change

FMNR and other land management techniques have made many of Niger’s farmers far more resilient in the face of population growth, desertification, and climate change.

This progress can extend beyond Niger. For other Sahelian countries facing the same future, FMNR offers a cheap and effective model to improve farm productivity and reclaim land from the dunes.

Development experts and NGOs are hopeful that region-wide expansion of FMNR and other proven land management programs will help Sub-Saharan Africa adapt to the rainfall shifts anticipated under climate change.