The newly-released World Resources Report 2008 charts a path for how sustainable, nature-based enterprise can help the world’s 2 billion rural poor escape the cycle of poverty.

Today, 2.6 billion people live on less than $2 a day. 75 percent of people at the bottom of the economic pyramid live in rural areas and are dependent on natural resources for some or all of their subsistence. The rural poor face even tougher challenges ahead, as climate change threatens to destroy the ecosystems and natural resources on which they depend.

But the World Resources Report 2008 finds that well-designed, community-based sustainable enterprises can improve the way the rural poor draw from their area’s natural resources. Ultimately, these programs can make their communities more resilient against climate change and the other economic, social, environmental challenges they will face.

Bangladesh’s innovative pilot program in people-led wetland management demonstrates how sustainable enterprise can lift people out of poverty, and protect the environment in the process. Read more about the case study in Chapter 3 of the report.

A decade ago, many of Bangladesh’s wetlands were devastated--an exploding population, poor government policy, increased deforestation and pollution had taken their toll on these ecosystems.

But when the government changed how it grants access to freshwater fisheries in three major watersheds, the fisheries were restored along with the rural communities surrounding them.

The turnaround shows how community-based natural resource management can nurture enterprise, generate income and improve the state of local ecosystems.

Based on the “co-management” of wetlands by new community institutions and local government, the Management of Aquatic Ecosystems through Community Husbandry (MACH) program has revived fisheries in three degraded wetlands. The MACH program, funded by the government of Bangladesh and United States Agency for International Development (USAID), has improved the lives of 184,000 of Bangladesh’s poorest citizens.

The nine-year program had tangible, positive results. From 1999 to 2006, the project produced the following benefits for the villages:

Overall, MACH communities earned US$4.7 million more from local fish sales in 2004 than they did in 1999 due to the revival of wetland habitats and fish stocks.

While the long-term sustainability of these benefits remains to be seen, community-led wetlands management has improved the ability of some of Bangladesh’s poorest inhabitants to survive economic downturns, environmental disruption, and the potential impacts of climate change on the country’s low-lying floodplains.

The MACH program and similar projects have provided a promising national road map for protecting natural resources while enhancing livelihoods.

By protecting wetlands from further overexploitation and degradation, communities have also improved the environmental resilience of the resources on which their lives and livelihoods depend.

“Before, we were nothing,” one Bangladeshi said of the MACH program, “but now our dignity has increased so that we can shake hands with all kinds of people.”

How Do We “Scale-Up” Success?

The report found three common elements that MACH and other nature-based enterprises needed to be successful: 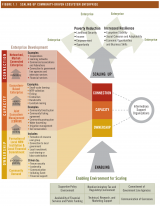 When these three elements are present, communities can begin to unlock the wealth potential of ecosystems in ways that actually reach the poor. In so doing, they can build a base of competencies that extends beyond nature-based enterprises and supports rural economic growth in general, including the gradual transition beyond reliance on natural resource income alone.

To effectively fight global poverty, successful programs such as MACH in Bangladesh need to be “scaled-up” geographically, economically and politically. Expanding these efforts can provide the world’s rural poor with ways to derive more sustainable income from nature-based enterprises, while at the same time developing their resilience to emerging new environmental threats such as climate change.