For roughly thirty years, Mexico City has been a city in rapid decline, threatening to descend into a murky stew of crime, pollution, and chaos. But in recent years the city has regained its footing, experiencing an urban renaissance powered by a series of projects that have dramatically improved the quality of life of the 18 million people that make the city their home. 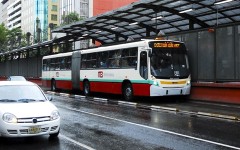 The original Metrobus corridor on Insurgentes launched in 2005

On Thursday of last week, the city enthusiastically kicked off one such project: Insurgentes Sur, a nine kilometer extension of Metrobus, the city's Bus Rapid Transit line on Avenida Insurgentes, one of the capital's busiest thoroughfares. Generally, opening up a new bus line like the one on Insurgentes can be a complicated and rocky affair. But bus operations along the new line have been incredibly smooth, a testament to the professionalism and competence of Metrobus and the bus operators, two groups that have matured considerably since Mexico City's first Bus Rapid Transit line opened in 2005. 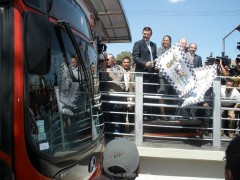 On the streets affected by the new line, policemen were out in full force directing traffic, and Metrobus employees passed out brochures and answered questions at each station. The Center for Sustainable Transport in Mexico (CTS-Mexico), an affiliate of the EMBARQ Network that is working with Mexico City and Metrobus to develop and expand the bus system, created and distributed safety literature to pedestrians, bus riders and drivers. The new buses are already filled with passengers and at one station local residents gathered with signs thanking Mayor Marcelo Ebrard for expanding the Metrobus system. 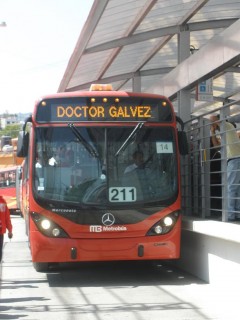 The new line has red buses

The opening of the extension is a boon for Mayor Ebrard, who had campaigned on a platform of expanding Metrobus and building a safe and affordable mass transport system. Mayor Ebrard can now rightfully claim to have joined the ranks of an elite group of mayors in cities around the world - places like New York City, London, and Paris - that are working to improve the quality of urban life through sustainable transport.

In 2002, when EMBARQ - WRI founded CTS-Mexico, Bus Rapid Transit wasn't even on the city's agenda. The opening of its second line indicated just how far the city has come in a mere six years. The city now boasts nearly 30 kilometers of bus-only lanes, with dozens more planned for the near future. As the specter of global warming looms over the planet, Metrobus is a shining example of what can be done to reduce CO2 emissions.

The first bus line on Insurgentes removes an estimated 47,000 tons of CO2 from the air each year, 34,000 of which have been credited by the Spanish Carbon Fund. And the 9 kilometer extension is expected to reduce 10,000 more tons of CO2 annually, according to preliminary calculations by Metrobus. 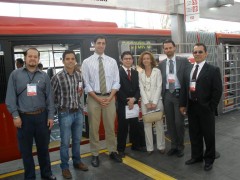 On the ground, the most immediate effects of Metrobus are that it has significantly shortened commute times for passengers who would otherwise be snared in traffic. And the passengers have responded positively, giving the system high ratings. Above all, Metrobus is defying the conventional wisdom that Mexico City is beyond repair, the undesirable yet inevitable consequence of petty politics, rapid urban growth, and uncontrolled pollution. As the Metrobus experience shows, government agencies, civil society, and businesses can work together to advance the common good even in the most complicated of places.

CTS-Mexico continues to work with cities all over Mexico to develop sustainable transport solutions with the financial support of Shell Foundation, Caterpillar Foundation and the Hewlett Foundation. Find out more at www.ctsmexico.org.