Once isolated Paraguay has changed radically due to a boom in soybean exports, which has brought changes in land and pesticide use. 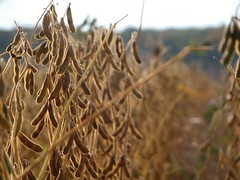 Weak government regulation and poor public education about pesticide use highlight the need for better environmental governance. Access Initiative (TAI) partners, Instituto de Derecho y Economía Ambiental (Environmental Law and Economics Institute, IDEA) are working to build government capacity to make sure that the growing soybean trade is good for the environment and for workers.

National Public Radio recently interviewed Sheila Abed, the founder and now Executive Director of IDEA. She spoke about the problems surrounding glyphosate, a pesticide widely used in soybean farming. (Glyphosate was formerly known as “Roundup” when it was under a now-expired patent by Monsanto.) The weed-killer is generally considered safe for workers and widely used in the other countries, including the United States. But without proper handling procedures, glyphosate and its typical additives can pose potentially serious health effects.

This occupational hazard does not represent poor science or a weakness in the law as much as a weakness in environmental governance more generally. “Environmental governance” includes important “access rights” like access to information, public participation, and access to justice. In order to fulfill these rights, governments must have the capacity to provide these rights and the public must have the capacity to use them.

The case of Paraguayan soy boom highlights the need for both access to information and capacity-building for the government officials to ensure worker education and monitoring safe agricultural practice. In order for workers to know the difference between safe and unsafe handling, they must have access to information on potential health effects and how to avoid those health effects. Many countries address these needs through occupational safety hazard laws that mandate education programs and information dissemination programs for workers. To ensure that workers are receiving this vital information, governments must have the capacity to regulate employers. As the NPR story points out, some of the best ways of ensuring compliance is through partnerships with NGOs, including, in this case, labor unions and environmental NGOs.

We at WRI, the TAI secretariat, were lucky to have Ms. Abed stop by to lend us insight into the process that led up to involvement in governance issues around soybeans and eventually to the NPR interview. In the audio file below, you can hear her talk about IDEA’s work with The Access Initiative network as well as how the issue of soybeans reflects problems of weak enforcement and corruption in environmental issues more generally.

More of the WRI interview with Sheila Abed