A recent holiday visit brought home how global warming is already affecting the way we live—starting at the top of the world.

When my wife and I made our holiday plans this year, we decided for purely sentimental reasons to take my mother to her tiny arctic Norwegian hometown for her first Christmas there since 1946. We had no idea that, along with the traditional Lutefisk dinners, marzipan-covered desserts and dancing around the Christmas tree, we were about to confront the more contemporary issues of the newly warming Arctic and the resource-management struggles of the people who inhabit this part of the world.

The community we visited is called Hasvik, which lies on the island of Sørøya. The name means, "The Southern Island"—ironic because this island finds itself 300 miles North of the Arctic Circle and isn't "south" of too many other inhabited places on the planet. Humans have lived there on and off for thousands of years. 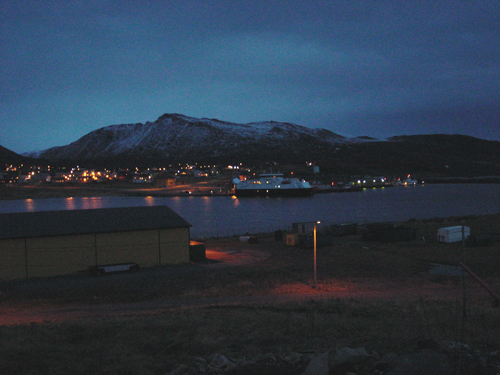 My ancestors came there "late," arriving in the 1800s from points south and east in order to take advantage of the thriving fishing industry that had resulted from the rise in export of Norwegian fish. The community kept thriving in its own way until Hasvik's population peaked in the 1960s, at around 1800 people. Of course to say that a 400-year-old community that had only grown to the size of 1800 souls was thriving wouldn't sound right for any other place, but given its remote location and the harshness of life up there, they had done well.

My mother said when she was little, every year some fishermen drowned, women died in childbirth, and people even died from things like lockjaw from cutting themselves on rusty metal. There was no hospital and there was no doctor apart from what could be found after a 7-hour boat ride, weather-permitting. And so they lived as well as people could have, given their circumstances.

But the same rich fishing banks that had sustained them and helped them grow (however haltingly) became a problem as the community allowed itself to remain dependent on its small-boat fishing operations while huge trawlers from southern Norway as well as from Britain and Spain fished the waters further out. The fish stocks started to show the strain in the early 1970s. I remember the summer of 1973, when we first saw fishermen trying to make sense of fishing quotas that they had been given by the Government.

And that was the beginning of the end. Every time I visited from then on, more people had left and slowly the harbor emptied of its beautiful traditional wooden fishing boats.

Fast forward to December 2007, my wife, 80-year-old mother, daughter of 6 and I all traveled up to see the old place. As we flew through the high winds of the North and said goodbye to the sun somewhere over central Norway, my Mom explained to my daughter that the only reason her town even existed was because of the Gulf Stream heating it from all the way down in the Gulf of Mexico, a fact that was taught to all the children of her town from a young age. They almost worshipped it.

Her home region is the world's northernmost year-round, ice-free coast and a beneficiary of the great ocean conveyor belt. But that heating effect doesn't quite change where this place is on the planet, it just makes it warmer than the tundra of Siberia. Christmastime, therefore, was still going to be a pretty icy cold experience for the likes of us Washingtonians.

Or so we all believed.

As our plucky little propeller plane tottered onto the Hasvik runway in 60-mph winds, I immediately noticed two things. One was that it was raining, and, two, that there was no snow on the ground. When my wife stepped off the plane onto the tarmac, a gust of wind immediately took her glasses with it, and those glasses became a part of that dark arctic night, never to be seen again. Luckily my wife did see again when the postman appeared at my uncle's house bearing his wife's spare glasses, which the grapevine had informed him would fit my wife’s prescription. Time elapsed from glasses flying into the night to the kindly postman offering perfectly fitting extra pair: one half-hour. This is a small town's small town. Everybody we met knew exactly who we were and why we were there. They also immediately waved around them and said, "Sorry we have no winter for you."

No winter indeed. Of the 10 days that we spent in arctic Norway it only dipped below freezing for two days and then just barely. That used to be unheard of. We did need our coats and hats though, because the wind never goes below 30 mph and even a balmy 40 degrees can be mighty nippy. And the darkness of winter was still there. There was two hours of weak daylight a day with no sign of the sun but a slightly yellow horizon. At least the darkness was still as it should be! 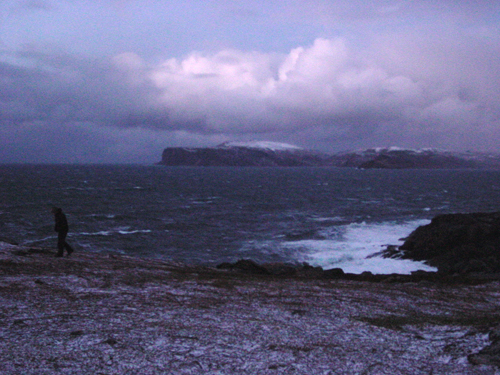 With no real arctic winter to awe us, and in my desire for some authentic experiences, I decided that what we needed was a small sea voyage. We went to the dock early one morning and stood in the mist waiting for the boat to what locals call, "the City", i.e. the town of Hammerfest -- 9,000-strong and growing. I'll get back to why it's growing instead of dying out like Hasvik in a minute.

The boat was late and after a while a man asked us if we wanted to wait with him in his car. Bundled to the nines, we obviously looked like we weren’t used to standing on a dock in the dark while the locals looked like they were dressed for a springtime stroll through on the Washington Mall. After we accepted his offer and introduced ourselves, Geir immediately mentioned how spooky it was to have September weather in December.

It also turned out that he knew all of my relatives, had shopped in my grandfather's general store when he was a child, and knew all about who had gone where and when. And it was true that almost every single kid or relative that I had played with as a child—as well as all of their siblings—had moved elsewhere. Geir, our benefactor, was himself going to move. He had taken a job with the huge natural gas field project in Hammerfest called Snøhvit, (Norwegian for Snow White). In one of those more ironic blasts of globalization, Snøhvit was about to start selling natural gas to Washington, DC. Geir was going to move his family south and then commute north to Hammerfest to work on a project that would have a direct relationship to the frying of my Sunday morning breakfasts back here at American University Park as well as the heating of a good many WRI employee homes!

So here was the reality, Hammerfest is growing with the gas field, and Hasvik is shrinking from over-fishing.

We made it back home to Hasvik on a boat ride so bumpy that even the locals got seasick and I managed to experience the sensation of having my feet leave the floor as the boat went into a trough only to then come crashing to the floor as the boat rose up the next wave, and then, in my attempt to force myself back to my feet, I would fly up into the air as the boat lurched back downward into the next trough.

Not Just the Ice Sheets Are Shrinking

Back in Hasvik, my cousin arrived with his family. He was born and raised on the island, had hiked and explored every bit of it, and had even kayaked around it. Even he had moved to where he could work as a geologist. It makes sense that someone that grew up in this dramatic landscape would want to study the nature of rocks, mountains, seabeds, and sediments. 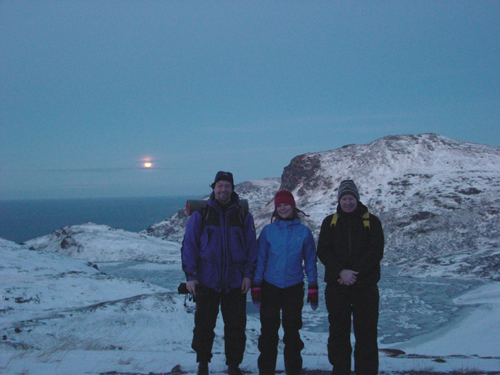 Hasvik, Norway (December 2007) My Hasvik-born and bred cousin Frode (left), his Swedish wife Aasa (middle), and me. We had to hike up into the hills to find some winter. Normally the place we are standing in this picture would be under two meters of snow. Source: Ian Fossberg.

He took us for a hike one day up into a highland area where we finally found some snow and some frozen ponds. When we took a break, he pointed out a small town in the distance and said, "That is Dønnesfjord, and no one lives there anymore." It was strange to hear him say it, with a little awe in his voice. My mother used to visit friends in Dønnesfjord when I was little kid. And here we were looking down on a perfectly kept little town with a church and a school and nobody around. It looked doubly strange in the half-light of an arctic noon.

The island is filled with abandoned villages and settlements, some say they go back to the stone age, but this one was abandoned in our era in a country that consistently ranks as having one of the world’s highest standards of living. Even being in a rich country can’t save some places from the ultimate irrelevance of simple abandonment. And all this is only about 70 miles from the industrial dynamo that is Snøhvit. As we walked back down the mountain, my cousin said, "In a few years, Hasvik will be nothing but a summer vacation retreat for people from other places." The statistics bear that out. In the 1960's the population hovered around 1800 people and now it has diminished to around 1,000. On average, about 24 people a year move out of the community. Since the older ones tend to stay behind while the younger ones move away, the death rate is accelerating while the birth rate is decelerating.

Another reason why my cousin may be right about the vacation retreat idea is that the area around Hasvik is drop-dead gorgeous and could actually thrive on its good looks if more people knew about it.

Of course, if the Greenland ice sheet melts sufficiently to disrupt the Gulf Stream, as some scientists are claiming is possible, then this slow, orderly emptying of Hasvik will have been for the best. 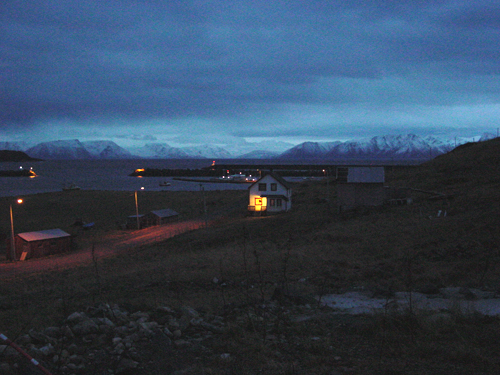 On Christmas Eve we went to the church (as is the custom in small Norwegian towns) to listen to a sermon delivered by a priest who had flown in from southern Norway (they don't have their own priests anymore in Hasvik). He seemed like a nice guy, but he also seemed almost foreign, like he came from the normal conduct of things into this slowly disappearing, and unnaturally warm place. After the service, we visited my grandparents' graves and lit a candle on them. As we walked away one of the kids said, "The flame's already gone out, should we light it again?"

My uncle, who has taught three generations of schoolchildren in Hasvik, just shook his head. He knew it would just flicker out.