Over the last year I’ve been visiting cities around the world, studying their bus systems. My review includes many aspects ranging from the political and managerial environments that allowed the different bus systems to be implemented to the actual design of the systems themselves.

I have compiled my findings in the book, A Critical Look at Major Bus Improvements in Latin America and Asia, set to be published this spring. For any city leader interested in making an environmentally sound mass transit project a reality, there is valuable advice contained within the pages of this book, taken from cities that have already embarked on such projects. 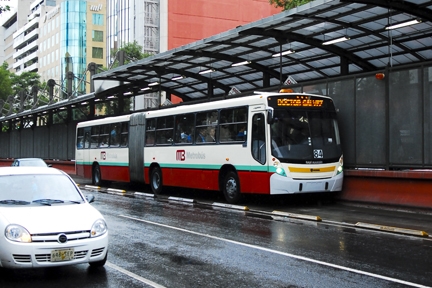 Metrobus in Mexico City: One of the eleven bus systems reviewed.

On Thursday, January 17th, I presented the findings of my research at Transforming Transportation, an annual event hosted by EMBARQ and the World Bank that attracts hundreds of transportation experts from around the world. The purpose was to convey the key messages from my research to the city leaders and transport planners assembled at Transforming Transportation so that they can learn from past experiences. Below are some of the more salient findings.

Many of the bus systems were plagued by recurrent planning difficulties, including:

In every case, initial operations, including commissioning, were rushed to meet political deadlines. However, most of the early problems were solved during the initial weeks.

Whether or not the initial problems were dealt with, many of the bus systems continue to struggle with the following challenges:

Although the entire study – complete with 11 cases studies – has not yet been published, I have produced a handout with a brief summary of recommendations. Also, a shorter version of the complete study has been recommended for publication in TRB’s Transportation Research Record.

The study was funded by TRISP, a partnership between the UK Department for International Development and the World Bank.