Many Peruvian school children aren't taught that isolated indigenous groups live in the Amazon tropical forests of their country. Further, some mining and oil company officials continue to deny that these communities exist. 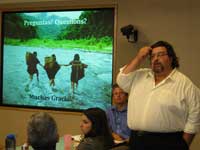 But indeed there are 482 indigenous communities in Peru's Amazon region -- 14 of which are completely isolated from any contact with the outside world.

While logging is the most serious threat to the livelihoods of indigenous communities (and most importantly, their continued isolation), the recent rise in oil prices has generated an investment boom in Peru's oil and gas sector. Many national and multinational corporations as well multilateral and private banks have responded quickly to this unprecedented financial opportunity, and the Peruvian government has allocated about 80 percent of the country's Amazon forests for oil and gas exploration.

In response, the Inter-Ethnic Association for Peruvian Jungle Development (AIDESEP) has filed for a ban on oil and gas exploration and drilling in areas of the Peruvian Amazon where isolated communities live.

Peru's official allocation process has been largely non-transparent and closed to public participation. Indeed, Peru is the last remaining country in Latin America without an independent environmental authority.

Within this context, WRI is announcing its new partnership with the Instituto del Bien Común (IBC). The partnership aims to protect sensitive ecosystems as well as the rights of indigenous communities with respect to policy decisions on resource development in the Amazon: particularly decisions made by government, industrial, and the financial sector.

The partnership is a natural. IBC has been working directly with Peru's indigenous communities to map their territories and help them gain legal title for their lands. IBC's Information System on Native Communities of the Peruvian Amazon (SICNA) is an ongoing, participatory approach that compiles and maps critically important information for responsible and equitable land management. Meanwhile, WRI provides forest mapping and monitoring resources and its expertise in aligning investment with environmentally sustainable development and poverty reduction.

Many companies and governments still push projects through to completion without community consultation or approval. In many cases, they believe their actions are justified, perhaps even in the public interest. Yet among affected communities, the ripple effects from such action don't dissipate quickly.

WRI's report Development Without Conflict: The Business Case for Community Consent (2007) has case studies from Peru, Argentina, Thailand, and the Philippines, in which businesses or governments worked with indigenous people to establish community consent for large-scale development projects.