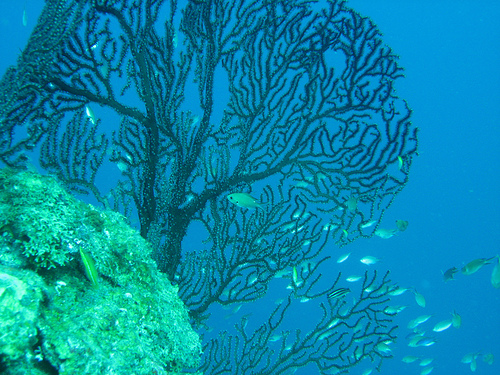 Coral reefs in the Caribbean have undergone massive changes over the past several decades. Algae has replaced live coral as the dominant species on many reefs. Surveys by the Atlantic and Gulf Rapid Reef Assessment have found coral diseases throughout much of the wider Caribbean. Once-common fish, such as large-bodied snappers and groupers, are now hard to find. Sewage pollution has been identified as a problem in nearly one-quarter of sites surveyed. Live coral has declined in two-thirds of the sites for which baseline data were available. In 2004, WRI found more than 60 percent of the region is under threat from overfishing.

Coral reefs are critical to the national economies of the region, underpinning both tourism and fisheries. Yet the economic value of reefs to these two major sectors - not to mention the value to subsistence fishing and local recreation - are often unknown.

Strong and tangible economic incentives often provide the basis for successful reef management efforts. Yet many of the most ambitious governments, coastal management authorities, and businesses lack sufficient information about the value of the reefs that they govern, impeding their ability to make wise decisions.

The Value of Reefs, and the Costs of Degradation

Having identified this gap, WRI has set out to create a standardized method for accurately and easily determining the economic value of coral reef ecosystems. The goal of the project is to improve coastal resource management in Tobago and St. Lucia by providing new, reliable information to key decision makers on the current value of goods and services associated with coral reefs, on losses likely to result from degradation, and on the long-term benefits of investment in coastal management. A Microsoft-Excel-based Valuation Tool will facilitate the baseline assessment of economic values and allow for multi-year comparisons as new data becomes available.

During a two-week period in February, WRI's Economic Valuation Team held a series of six seminars in Trinidad, Tobago, and St. Lucia to present preliminary valuation estimates for the benefits from coral reefs, such as tourism and recreation, fisheries production, and shoreline protection. The sessions provided forums for structured response to the methodology and valuation results, and to gain input on the possible application of the estimates. In addition, a beta version of the Excel-based Valuation Tool was demonstrated and seminar participants provided opinions and feedback. The seminars demonstrated considerable demand in these countries for economic valuation of coastal resources and many of the agencies attending plan to adopt the tool when it is finalized later this year.

Lessons From the Seminars

Politicians and policymakers in Trinidad, Tobago, and St. Lucia are interested in locally specific values, such as the value of Buccoo Reef in Tobago. There is considerable demand for maps showing the current value of coral reefs and value of prior sustainable development projects. These would be particularly useful in demonstrating the risk of ecosystem degradation from coastal development and the benefits of effective management.

WRI will release the final version of a valuation tool during the summer of 2007, allowing a wider audience to evaluate the financial contribution made by functioning reefs.