In recent decades, the giant Mesoamerican Barrier Reef has recovered from repeated bleaching events. Yet today the second largest reef in the world, stretching from northern Yucatan Peninsula in Mexico and extending to islands off the north coast of Honduras, is threatened again. Land use, including banana and pineapple farms, in 400 watersheds along the coasts of four different countries, sends suffocating plumes of soil and fertilizer into the neighboring Gulf of Honduras and Caribbean Sea.

The reef is not just big. It plays a critical role in the economies of the nations whose coasts it traces. Increasing damage to the ecosystems along the reef mean reduced biological productivity by coral, which in turn means reduced income from fishing and tourism.

"As humans have altered the landscape, an increasing amount of sediment and nutrients are reaching coastal waters and the Mesoamerican Barrier Reef itself," says Lauretta Burke, a senior coastal ecosystem expert at WRI.

Landowners have lacked useful information to guide their agricultural practices. The connections between alteration of the natural landscape, crop type, and farming practices, and the health of the reef have been murky.

So, in 2004, the International Coral Reef Action Network (ICRAN) Mesoamerican Reef Alliance was born, funded by the United States Agency for International Development and the United Nations Foundation. Effective watershed management, one of the Alliance's three priorities, requires knowing what land contributes the most pollution to the reef.

Building on recent successes mapping watersheds in Belize and the U.S. Virgin Islands, WRI took charge of modeling what happens to water that runs through those 400 watersheds, an area of 187 million square kilometers, and what happens when that water hits the sea. For this work, WRI partnered with the UNEP-World Conservation Monitoring Programme and the University of Miami.

The result of that work, Watershed Analysis for the Mesoamerican Reef, was released December 12 online and on CD-ROM. 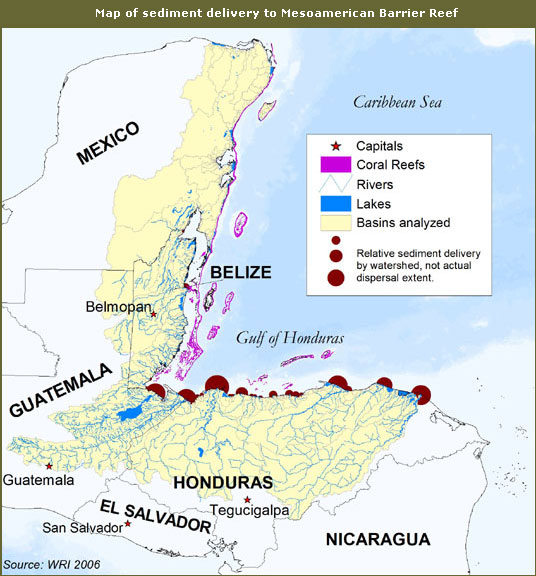 "Our analysis shows that pollution from farms in Honduras can inadvertently damage the entire Mesoamerican reef, which is an important source of revenue from tourism and fisheries," says Burke, who co-authored the study with WRI's Zachary Sugg.

Other findings include the following:

WRI is now working with partners to train local technical staff in the four relevant countries to use the newly compiled data and tool to inform land-use decisions. The most recent training, in August, attracted more than 40 government officials and mapping professionals from a variety of sectors.

World Wildlife Fund (WWF), another Alliance parter, is using WRI’s analysis to identify agricultural areas in the region that need to reduce pesticide use and soil erosion, and is establishing collaborations with farmers and agricultural businesses to help them implement management practices to reduce impacts on the reef.

"We are using these analysis results to reduce pesticides and to control soil erosion from major commercial agricultural sectors while sustaining productivity," said José Vásquez, a senior agriculture official for WWF Central America. "At present, WWF is partnering with agroindustries such as Chiquita; Dole; CropLife Latin America; The Association of Citrus Producers from Sonaguera, Honduras (ACISON); and Azucarera del Norte, S. A. (AZUNOSA), one of the major sugarcane producers of Northern Honduras."

On December 5, for example, AZUNOSA signed a memorandum of understanding with WWF. AZUNOSA’s general manager Mario Hernández voiced his company’s commitment to quick results, adding, "The most effective and responsible way of doing business is by contributing to the society in which we operate, creating job opportunities, taxes for public services, and protecting the environment. Working with WWF will be a beneficial experience for Honduras and for our region."